Amidst the chilling news of USA election that is making the whole world sob and whisper in despair, I wish to lessen the pain with a light and cheerful review of Artissima.

With over 50 thousand visitors, 193 international and national galleries, 4 different sections and an array of curators called to oversee, curate and select projects, this piedmont art fair can be easily considered a curatorial finesse at its best. Lead for the past 4 years by artistic director Sarah Cosoulich Canarutto, Artissima and Torino itself have become a destination for intellectual research, contemporary art, discovery and experimentation.

7 prizes were awarded this year to both galleries and artists; and 400,000 euros were allocated by CRT Foundation for the acquisition of 10 artworks for Castello di Rivoli and GAM. These are just two examples of the kind of support and endowment the city of Turin is bestowing to contemporary art and culture in general.

The section New Entries is dedicated to emerging galleries, and this year 18 were selected from around the world. 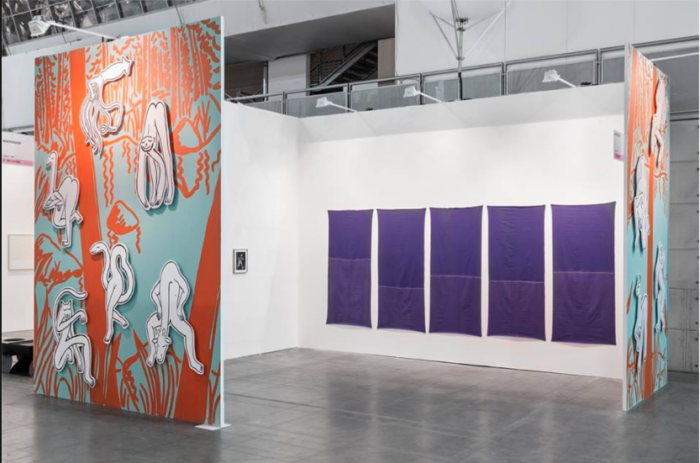 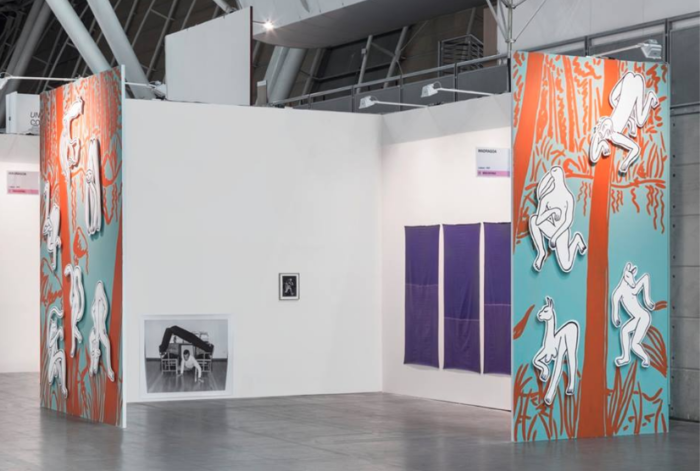 Opened at the beginning of 2016 in Lisbon, Galeria Madragoa’s booth was  one of this year’s highlight. Showcasing works by Renato Leotta, Luis Lazaro de Matos, Adrian Balseca and Joanna Piotrowska, the small but powerful booth was nominated for the best booth in its section. And this doesn’t come as a surprise. 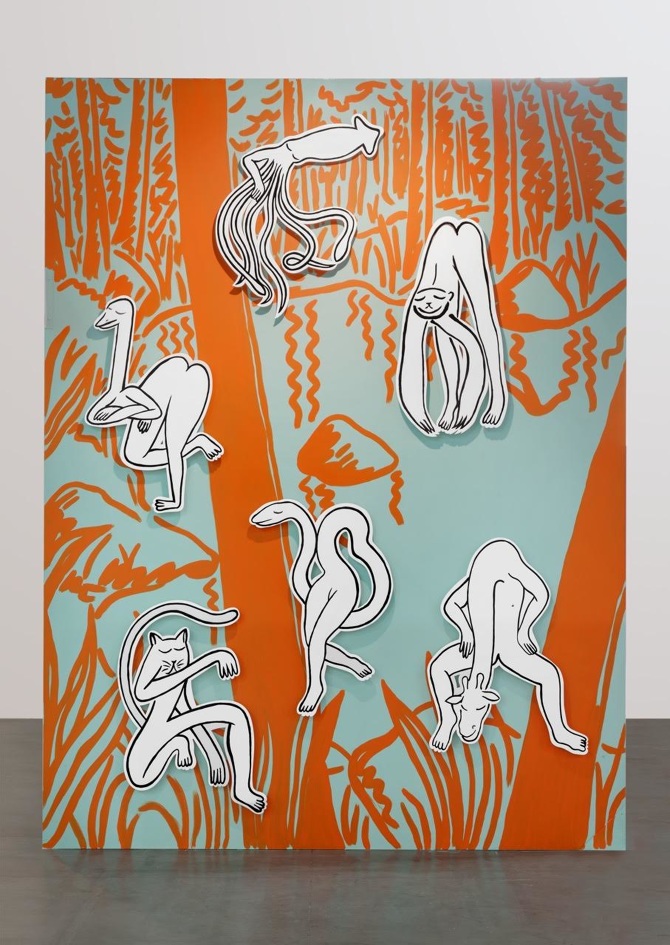 Inhabiting the external gallery’s wall was Clubbers a wall drawing sum sculpture by Luis Lazaro Matos. Depicting hum-animals dancing amidst a overly pop/stylised jungle landscape, this work is a tounge-in-cheeck reference to the imminent closure of many of London’s clubs as well as an ironic allusion to the changes of entertainment constrained by the rising costs of real estates. 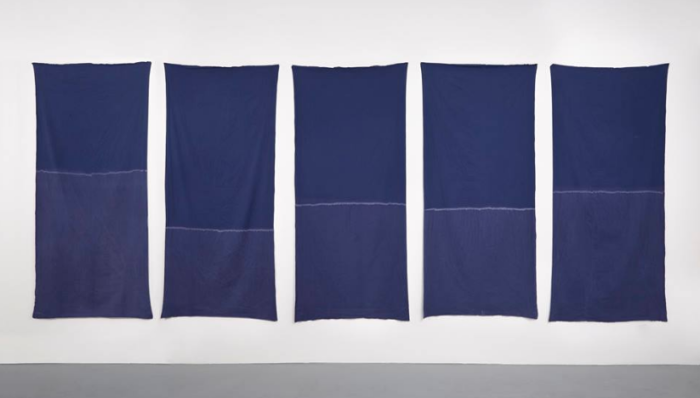 By entering the booth one was welcomed by the peaceful work Mais ou Menos by Renato Leotta. Five blu cotton fabrics hung mid air, each eloquently divided in two different shades of blue by a fine white line of salt. Running thru the fabrics at different heights and at different intensities, this line is a memento of the fabric being dipped in the sea. It acts as a living proof of the restrictions imposed by the artist’s body and by the different levels of the tide, registering a specific moment while at the same time elevating the work to pervasiveness. 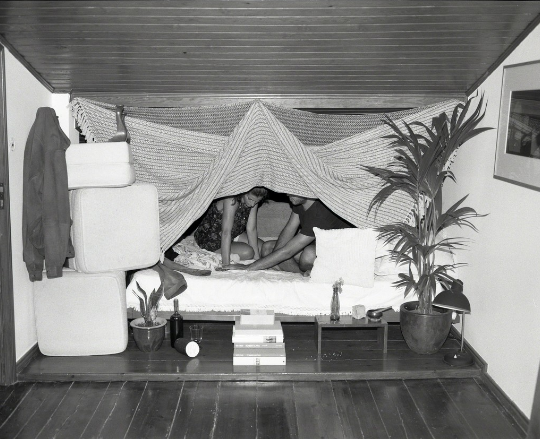 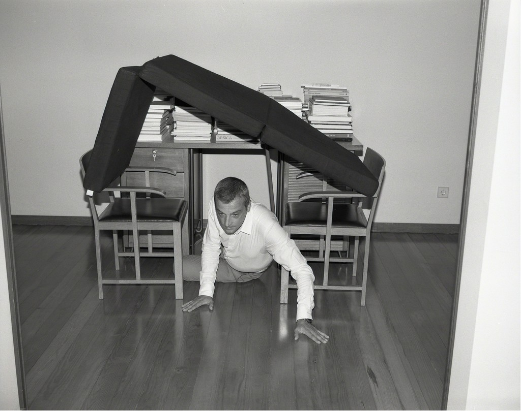 Frantic by Joanna Piotrowska was in fact Madragoa’s focal point.  Developed in Lisbon for the artist’s current show at the gallery, this black and white photographic series document a number of temporary shelters being built inside different homes. Absurd and precarious, these environmental assemblages bear a similitude to Focault’s heterotopias. Mirroring and somehow enhancing the qualities of each shelter’s creators and inhabitant, these shelters at the same time distort, unsettle and invert the space they happen to be located in. This distortion is subtly orchestrated by the artists herself via the choreographed postures of the human bodies inhabiting the refuges but also via the use of flash which flatten the image even further. For this frantic body of work the artist was awarded The Reda Prize, which grants her to publish a monographic publication.

Dialogue was the second new feature of Artissima this year. It featured galleries’ presentations of 2-3 artists in dialogue with each other.

Bruxelles based Wouters Waldburger had dedicated its booth to video art. Two videos, Confession of a Chamaleon and Seduction of a Cyborg, by Lynn Hershman Leeson were paralleled with Quella che cammina a video installation by Eli Cortinas. 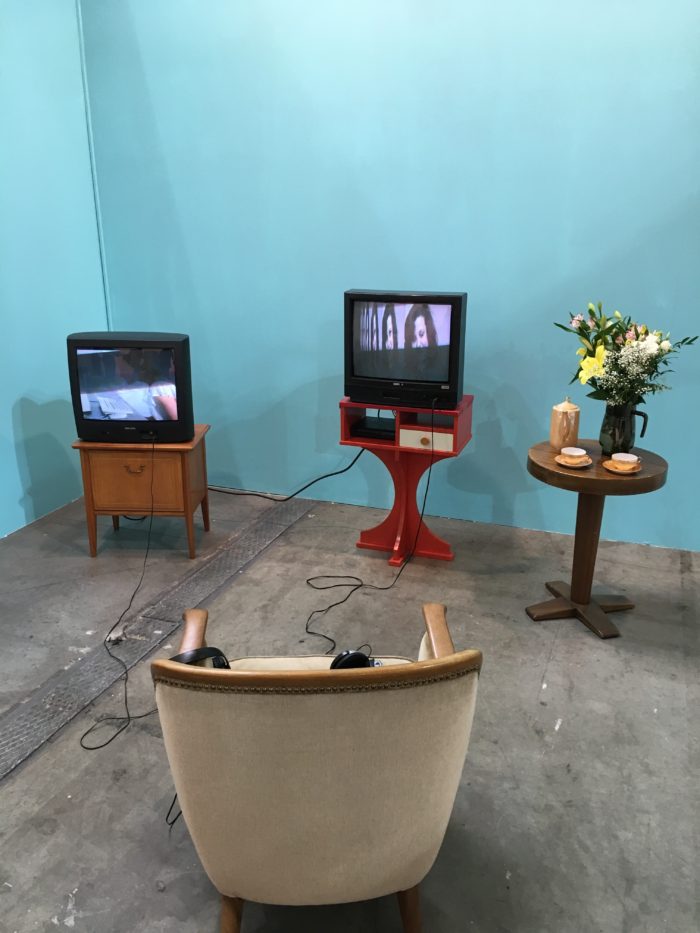 Lynn Hershman Leeson, Confession of a Chamaleon and Seduction of a Cyborg, installation view at Wouters Waldburger, Artissima 2016

Concerned by the way women are portrayed by media, Leeson in her 1987s work Confession of a Chamaleon, creates a confessional account of her experience as a call girl and a mother. Using split-screen techniques and multiple screens, the artist challenges the boundary between reality and fiction making. 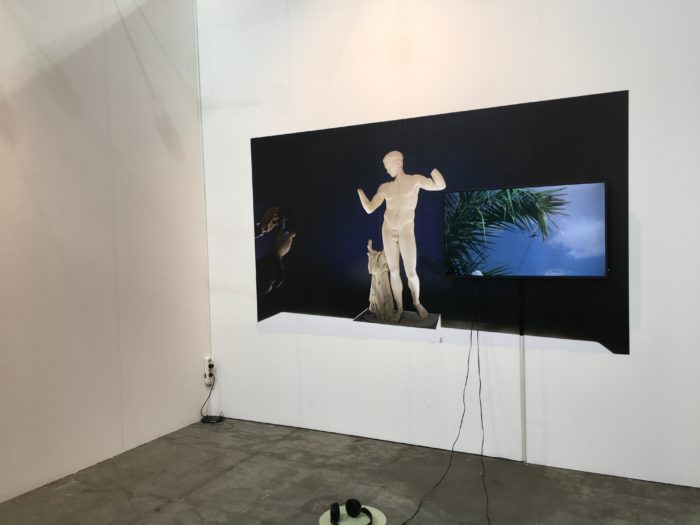 The 2014 work by Eli Cortiñas is a collage of European languages, found and new footage, and appropriated and created audio. Created during her residency at Villa Massimo in Rome, Quella che cammina question the artists’ own identity and her role in society. Tapping into female identity constructions, this dialogue presents an interesting perspective onto the contemporary position of women today. This seems a very present and actual concern, considering the recent results at US pols.

If Artissima wasn’t enough, one could step outside Oval Lingotto and venture out to two fantastic foundations, just a couple of kilometres away.

Fondazione Merz hosted two consecutive breakfasts to introduce collectors and VIPs alike Wael Shawky’s most recent project: Al Araba Al Madfuna. Awarded the Mario Merz Prize, this site specific installation, centring around the artist’s film trilogy Al Araba Al Madfuna, made use of “architectural set designs and sculptures to recreate the original atmosphere of the historical, literary and cinematographic references on which the stories are based.” 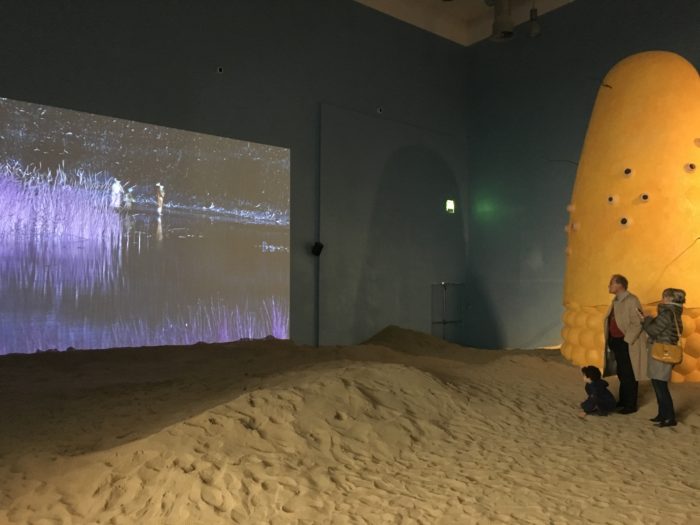 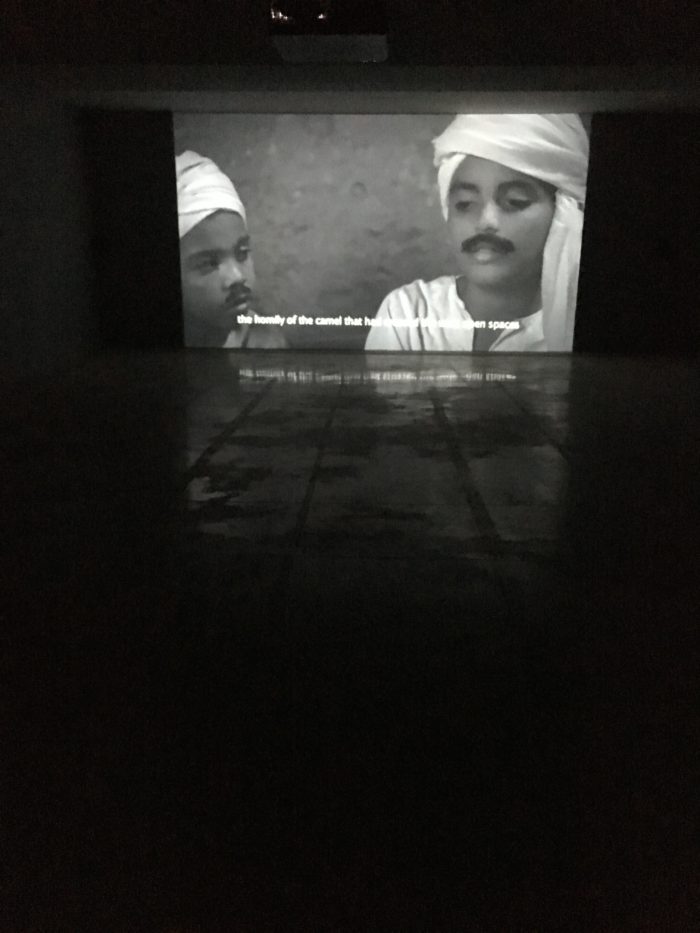 A sea of sand punctuated by dunes, palm trees and replica of houses in the desert suspended the viewers in a awe-kind moment. Immersed in an almost mystical environment, one was invited to walk around the space lullabied by the echo of tales narrated on the screens. In ancient Arabic language, these stories explore the obsession of the village Al Araba Al Madfuna and its inhabitants in creating myths and metaphysical beliefs. These were the parables of Egyptian author Mohamed Mustagab theatrically narrated by children. Dressed pup in turbans, gallabiyas and fake moustaches these children played the role of adults as they unfold the complexities and paradoxes of contemporary Egyptian society.

Ed Aktins’ Safe Conduct on view at the Fondazione, is part of a major retrospective carefully curated by Carolyn Christov-Bakargiev on view at Castello di Rivoli. A three-channel video-installation with images incorporating CGI footage, this burlesque airport security instruction video show travelers the procedure to follow in order to pass security checks. Chicken, guns, pineapples, human parts these are some of the items required to be placed on the tray upon inspection. 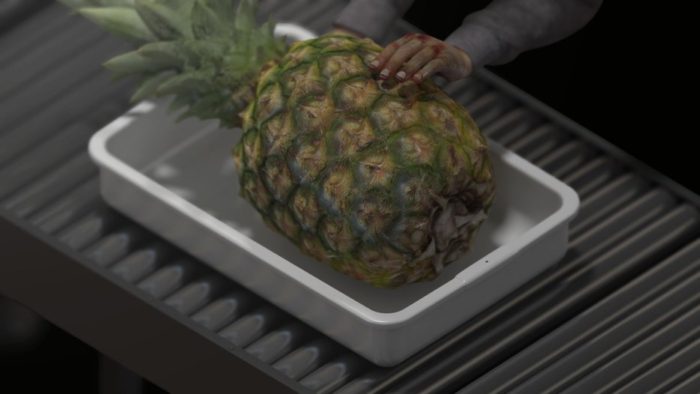 The video’s protagonist is a digital surrogate animated by Atkins’s own facial expressions. Set to Ravel’s ‘Bolero’ this carousel of protocol and rendered paraphernalias, this video exploit the gaps between reality and the image of such reality, venturing in the splippages of mediation.

Josh Kline’s Unemployment departs from another USA election, one which will take place in 2031, one which will cast a nihilistic future for capitalistic society. Sardonic rather than apocalyptic, this work follows the path of middle class workers which in the near future will be considered too obsolete and to expensive to work. Instead of them intelligent software will take up the roles left vacant by this new unfunctonal species. And how does Kline portrays this future? 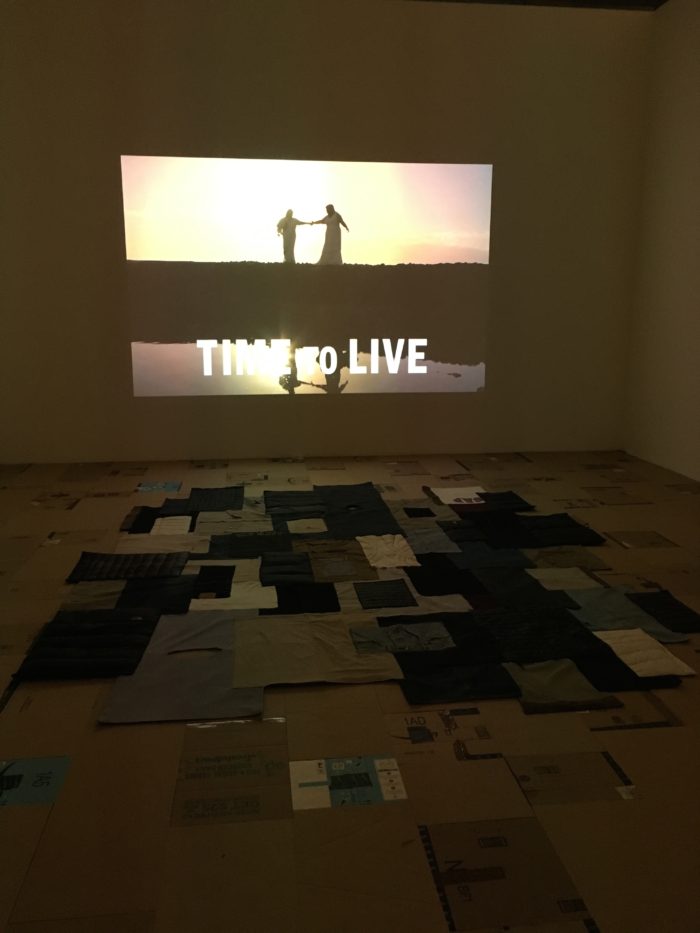 But ultimately Kline allows for some hope. Nested at the end of the exhibition space is Universal Early Retirement (spots #1 & #2), two faux commercials for a universal basic income. Reminding of Apple’s glossy and optimistic advertises, these short videos depicts the lives of these future people, people who live in sync with technology and enjoys life. In Kline’s view these utopian realities could be easily reached if only workers were prioritised over machines. “The future is now” but we are yet incapable of seeing it.