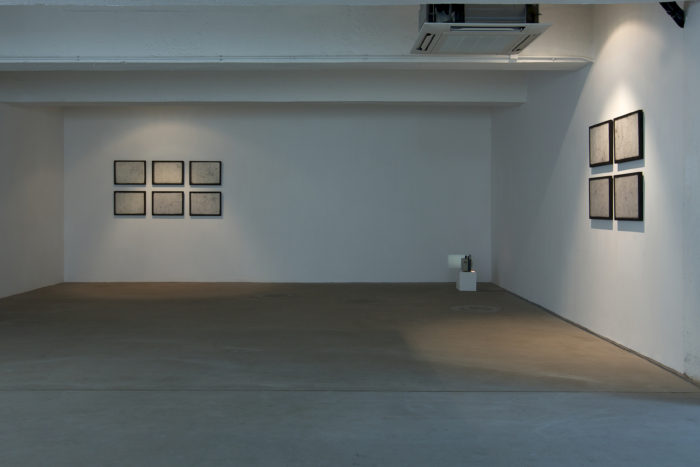 Kong Chun Hei is an artist of intellectual depth. He was born in Hong Kong in 1987 and he is one of Hong Kong’s most promising contemporary artists.

Kong portrays objects. He draws them with meticulous details and subtle seduction. Working within the realm of drawing, he reflects on the appropriation, consumption and regulation of our immediate surrounding, highlighting how these mediations are the result of an intellectual and contingent imposition. How does the act of seeing determine, or constrain our knowledge of the world? How do we separate illusion from reality, when faced by the buzzing confusion of our visual sensations, our own emotional response and the designated context of each living and non-living things?

To answer these questions Kong focuses on our defacto way of looking at things. He selects objects based on their functional properties and then alters their surface, function, property and shape. He records their external properties while at the same time twisting their functional role. This is a process of estrangement happening both on a conceptual and formal level. His practice ambiguously oscillates between representation and the nature of these entities. It demonstrates a sport of functional annihilation, which in turn detaches objects from their contextual identity.

His drawing is akin to a process of undoing, meaning that the act of drawing emancipates the represented object from its conventionality and designated meaning, liberating them from their individuality to the level of intrinsic universality. 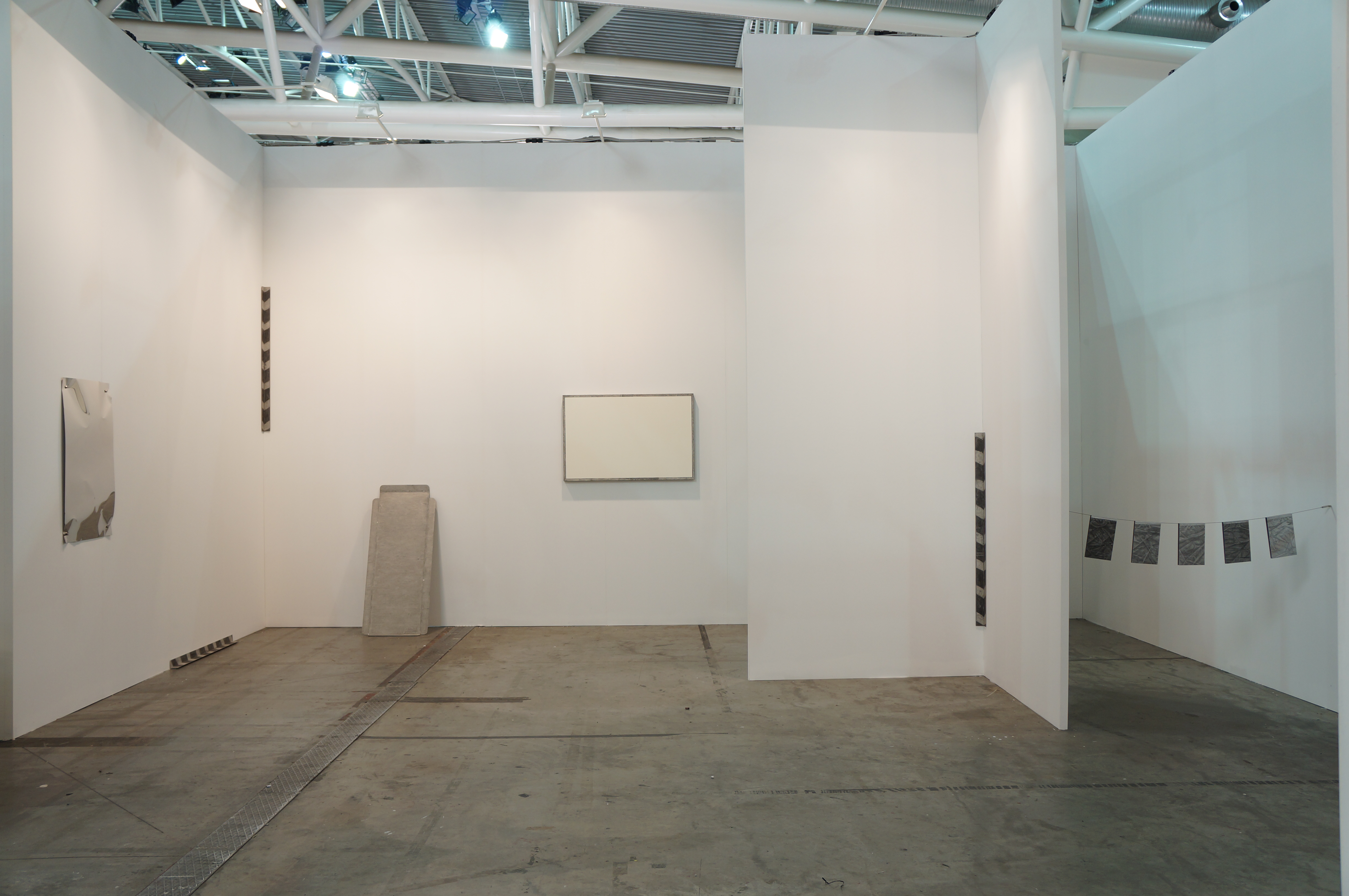 KONG Chun Hei Back and forth // Left and right, Artissima, 2014, installation shot

For the project Back and forth // left and right presented at Artissima (2014) by Gallery EXIT, Kong presented a refined questioning on our relationship with objects; advocating a non relational way of approaching objects and, as objects as such, art as well.  The project explored the notion of object-oriented philosophy as advocated by Graham Harman in”that the primacy of relations over things is no longer a liberating idea  (since it reduces things to their pragmatic impact on humans and on each other)” (Graham Harman: Art Without Relations, Artreview, 2014). 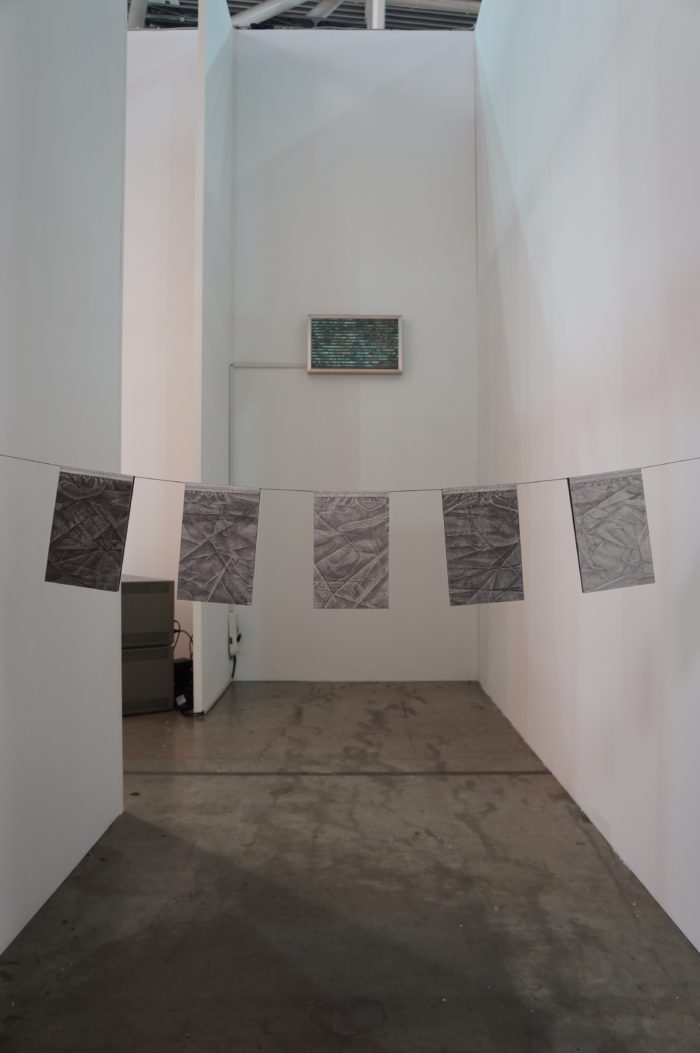 A line of flags lied in mid-air blocking one of the entrances’ booth. Flags was there, courageously preventing people from entering the booth while at the same time allowing them to peek inside. This tongue in cheek stratagem was borrowed from a theatrical staging technique; that is that moment when curtains open up to the actors and their stage. Hiding and protecting the sacred performer from the viewers, the curtains project a higher sense of expectation; of importance; or even belief. It is the belief of entering a sacred place where objects become art and as such are sacredly consumed and adored.  The work is, as a matter of fact, perpetuating this process of knowledge creation albeit its precariousness. The line of metal, so thin and irregular, gives the impression of being almost on the verge of falling down, weighted down by the weight of the flags.  This is an intentional act which on one hand exposes the vulnerability of that very form of canonised belief and on the other denudes the viewer’s encounter with art from its relational impression. 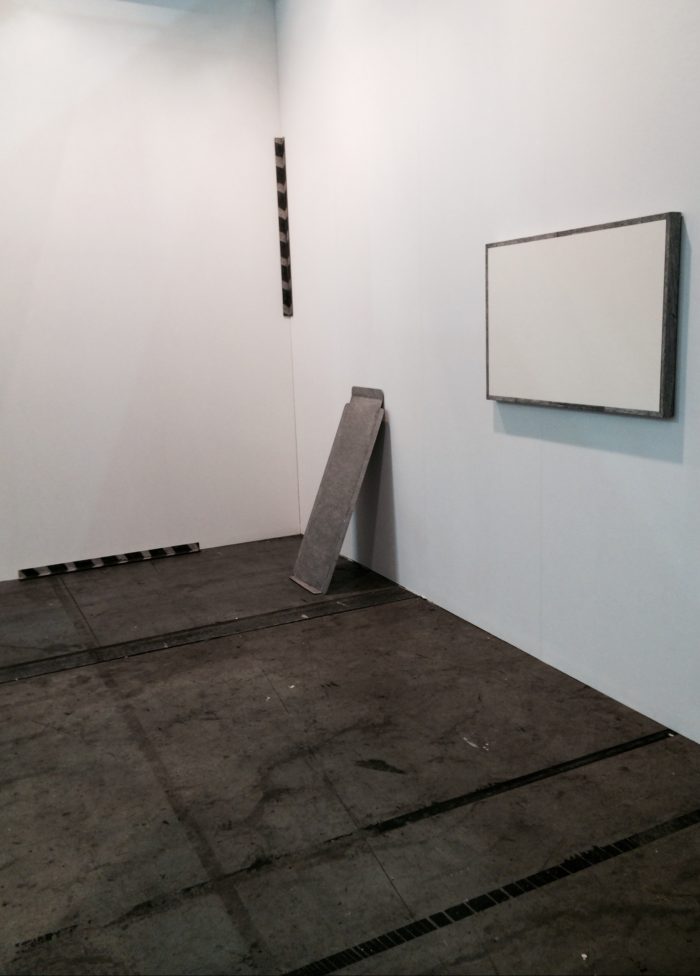 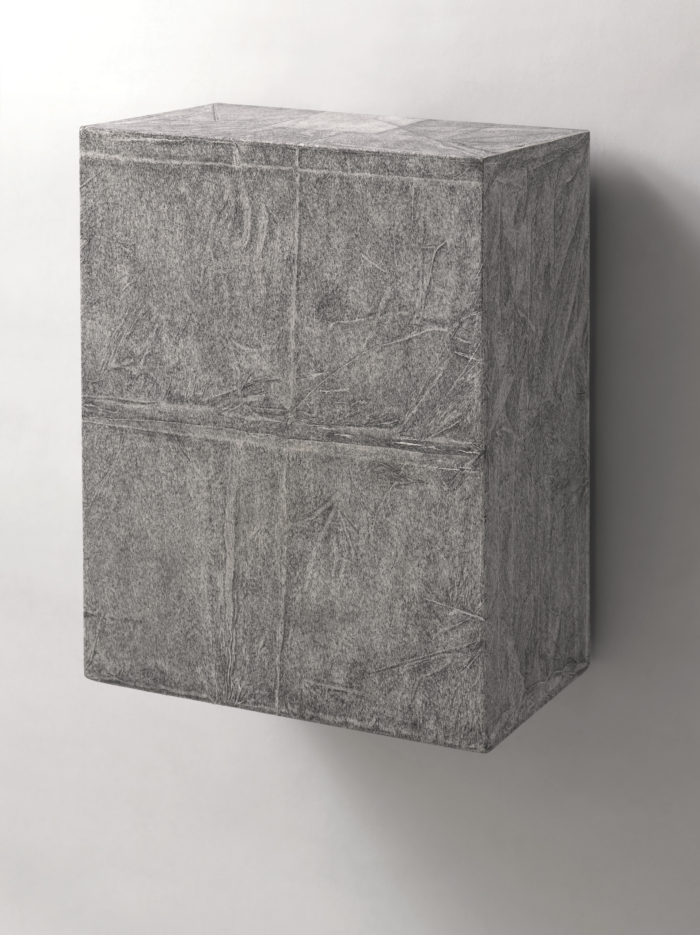 Think about a pen. Now think when you are writing with this pen. You don’t really pay much attention to your hand or the pen for what matters. The writing practice has become such an automated routine that the actual parts of this process don’t really count anymore. Now think when the pen runs out of ink. Now that’s when you realize. It’s a moment of transformation, of Umschlag (Heidegger, Being and Time). Likewise his drawings are a mental and physical movement in which the worked objects are physically removed from their environmental context and relocated to a space where the viewer’s automatic engagement is pushed to its limit.

Space then plays a pivotal role in Kong’s practice. It shapes and alters the reception of these objects; always balancing between mimicking and then altering our conventional way of consuming (art) objects. Physical space takes up the role of conceptual space, or space of the thinking. And these two states tend to be blurred in Kong’s drawings and in his moving images installations even more so. 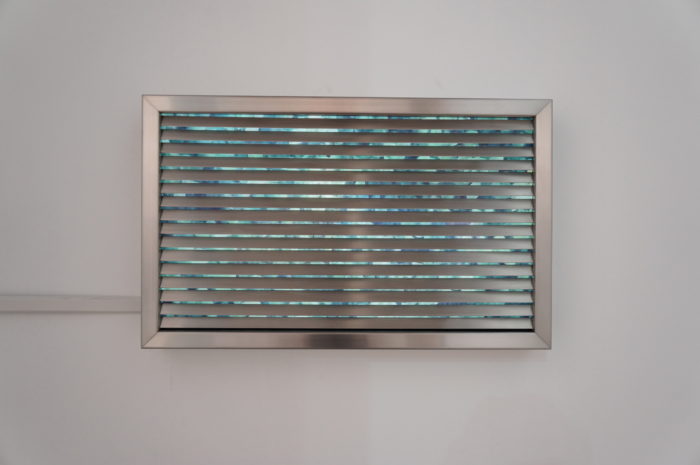 The work Vent, takes form as a ventilation frame releasing a green and transient glow. Hidden behind the bar of the ventilation frame, lies the video of a close up banner of leaves from an exuberant tree. By closer inspection the video exposes the texture of the banner in a steady and almost immobile flow. The mockery and appropriation of this “space for viewing” is brought even further by the realization that the ventilation frame is in fact a placeholder. Likewise in semantics, our placeholder is an inevitable element required by syntactic constraints but unlike semantics it carries just enough information to confuse the whole viewing experience. What are we looking at? is it the ventilation frame? the closeup video? or both? and what does the combination of the two create?

“We come to experience ourselves as isolated subjects standing reflectively before a world of external objects, which we thereby come to experience as standing over against us in the mode of something objectively “on hand” ( Heidegger, Being and Time).  And this is precisely how to pinpoint Kong’s practice: “on hand”.